With the taxi beams penetrating the smoky alleyway with their electric white light, Verb flicked his fog guard gills open and turned to Simile. “Maleficent believes the headlamps to be a pair of spectres from the beyond, sent to guide us on our righteous path…”

“I see that now, yes,” said Simile, flicking open the gills on his own guard. “Staring into these lights though, it’s like a needle being pressed into my brain,” he said, shielding his eyes from the ancient halogen beams.

“Do not fret, Mr Simile, for the ghoul will be banished in time and your mind will be your own once again…” said Verb, guiding his client to the vehicle.

Suddenly, the boom of a ship’s foghorn blared out, filling the silent city with its deep, resonating moan. 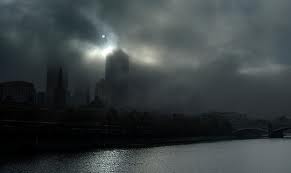 “Do not be alarmed,” said Verb. “It’s merely one of Proverb’s vehicular enhancements. There is more than mere road safety at the origin of its adaption. As you are aware the permanency of this fog we now reside in has heightened the appeal of our city to those from the netherworld. This is our way of letting them know that this city still has her voice and will not slip quietly into the darkness…”

Simile let go of the door and his body sagged. “That’s a relief, I thought we were being attacked! I’ve been as jumpy as a Jack-in-a-box since this spectre arrived!”

Verb stared at the little man through the mist as the deep, throbbing engine of the black cab purred.

From out of the fog a Chinaman appeared, doffing his chauffeur’s beret as he moved closer.

“Mr Simile, I’d like to introduce you to our driver, Proverb.”

“Harsh is the voice which would dismiss us, but sweet is the sound of welcome,” said Proverb and he bowed as he opened the door of the vehicle.

“Indeed, thank you. My, my, why it is like the fog has been lifted from my eyes to see such a rarity up close. Is this really one of the lost black cabs? This is an ancient thing indeed, how is it still running?” asked Simile climbing through the door.

“If a ruler hearkens to lies, all his servants are wicked!” said Proverb, still holding the door ajar.

“Er, yes it is Mr Simile, the last one of its kind in fact, but what Proverb implies is that you don’t judge the car at first glance. First impressions can be deceptive. Thank you, Proverb.”

The chauffeur closed the door on Verb and his silhouette appeared at the driver’s door in what seemed like seconds.

“He moves like a shark in the murky depths of the ocean,” stammered Simile. “What speed…”

Proverb slipped into the driver’s seat and set off through the fog, accelerating down the alley.

He sounded the horn again and flicked another switch to trigger a massive xenon beam that emanated from the old Taxi sign on the front of the vehicle.

The road ahead was clear.

“So, Mr Simile, there is one question that I have not yet asked which still lingers within my cerebrum. I need to know the precise location of your spectre. Where is its local haunt, so to speak?”

Simile grinned through the mask like a hungry cannibal. “It appears only when I’m inside the joke shop. It comes before me, as bold as brass, like a whispering death.”

“A man isn’t really poor if he can laugh,” said Proverb.

Simile nodded, still smiling through the gills in his fog guard. “I live in the basement beneath my place of work… hence my complexion. I’m as white as a sheet in case you didn’t notice. It’s as tight as a drum in there but trying to find accommodation in this city is like looking for the sun in our sky.”

“So, why the shop and not your place of dwelling? This is crucial, Mr Simile. Has anything significant happened there? Try and think!” said Verb, staring through the front window of the cab into the endless gloom.

“A good laugh is the best medicine, whether you are sick or not,” said Proverb again.

Suddenly the brakes squealed, shooting Verb and Simile forward in their seats.

“Don’t laugh at the fallen, there may be slippery places in your path. We have arrived, Mr Verb.”

Verb pushed himself away from the barrier that cut off the driver from the passenger’s in the back seat, and peered out of the window. The street sign across from him was barely visible through the blanket of fog, but they had obviously reached Amusing Avenue.

“I should have mentioned that Proverb drives quickly, Mr Simile, and as you now know this is no ordinary black cab…”

“Bad news travels fast… I have to be faster!” said Proverb, who was already outside the cab, opening the passenger doors.

“Right then, work is to be done, let us slay said spectre with immediate effect!” said Verb, pushing out into the smog with the smirking Simile close behind him.

Follow the link for the next installment – Episode 4: The Spectre

One thought on “Deed Verb: The Case of Simon Simile: Episode 3”