They stared at the young ghost suspended inside the spirit trap.

“Call no man happy till he is dead!” said Proverb, still trying to ease the pain of the spectre.

“Before I release this kid, just be ready for what may come at us…” Verb said and nodded as he withdrew one of the green vials from inside the Spectre Spirit Level. He tipped it over the ‘Laqueum’ inscription that Simile had scratched into the floor.

One drop landed and slowly the marking melted away. 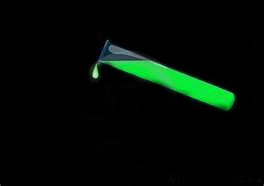 Verb backed off, holding tight to the vial and stood unarmed beside Proverb – who was only ever armed with wisdom. They stood behind Maleficent, who retracted the glimmering spirit sword from within her jacket.

“There is no pen, mightier than this!” she exclaimed. “This sword has no double edge, if it strikes, it bleeds, and the motion ends with death.” 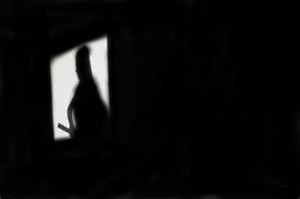 The trap now broken, the spectre was free to follow the passageways of ancient ancestors that still existed within the walls of these buildings. Yet, the spirit did not run. It did the opposite. It approached them.

Maleficent was poised, sword tilted, ready to strike, but somehow the spirit understood and stopped. Hovering before them it turned, slowly drifting towards the back of the shop. At the wall it paused and beckoned them.

“Moving walls would be good, right now…” said Verb as the spectre disappeared through the brick.

Maleficent was already through the front door of the joke shop and out into the fog.

He saw her turn down the narrow gully beside the building and followed the feint glow of the spirit sword until Maleficent stopped at the far end.

The spectre was waiting for them within the mist that shrouded the wasteland at the back of the shop.

Together the three of them walked in silence down a small set of steps that led onto  a patch of rough grassland, too wild and unkempt to be called a garden.

Verb moved through the fog to the spectre who was holding position above the ground. Verb dropped low and pulled on his fog guard. From inside his jacket pocket he pulled out a light stick and cracked it. Still in a crouch, he held it beneath the ghost, revealing a mound of earth beneath its supernatural aura and a stone slab jutting out of the ground.

It was a grave. 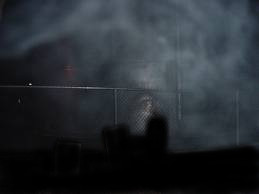 As he waved the light stick through the fog, he could see it was not the only one. This wasteland was some sort of mass grave…

“He’s been seed-planted, Verb!” said Maleficent. “We need to close his circle of life,” she continued, her grip slackening on the handle of the sword.

Verb nodded and handed the light stick to his partner. He pushed his hand inside his jacket pocket and removed the precious angel zippo.

He flicked his thumb down, lighting the flame.

“He who dies for the truth finds holy ground everywhere for his grave,” whispered Proverb, almost in prayer.

In the middle of the grave beneath the spirit was a marker with writing scrawled upon it. Verb plucked it from the ground and read it above the flame. There were five names, each beneath the next with a line separating them.

Verb peered up at the spectre, who had now settled beside him. Through the glow of his spirit he was pointing to the name at the top.

The spirit nodded and moved back over the grave.

“This list names the flowers beneath,” said Maleficent, taking the marker from Verb.

As she moved across the garden with the spirit sword now sheathed, Maleficent cracked light sticks and threw them down near every grave in the garden. 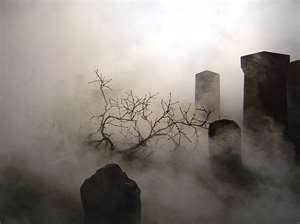 There were ten plots, with five names on each marked list.

“Fifty bodies,” said Verb. “I’m so sorry, Carl!” he said as he stepped back and flicked his zippo ten times. Each time he did, a dark angel of black flame appeared and flew from the lighter to the graves. Each angel flickered and held position over each grave until he gave the command.

Holding the zippo to the sky Verb called out. “Descend and burn bones so the dead shall pass and return to the flint once their fate has been cast!”

The dark angels scorched into the ground and within seconds Carl’s apparition faded.

They all stood in silence in the fog, until the angels whooshed back into the zippo which steamed and closed shut.

Verb pushed it back inside his jacket and turned to his friends.

“They were the last victims of The Grinner, and I swear to you now there will be no more!” he said, staring into the strangled sky as the three of them turned and disappeared into the fog…

High on a roof-top, one block down from Amusing Avenue, a curious, little bald man retracted his fog-scope. Emerging from the shadows, he picked up the blade he had placed upon the brick wall. “Now it begins!” he muttered through his fog guard…and then he grinned.

DEED VERB, MALEFICIENT & PROVERB WILL RETURN IN… THE CASE OF ALANIS ANAPHORA.

One thought on “Deed Verb: The Case of Simon Simile: Episode 6”